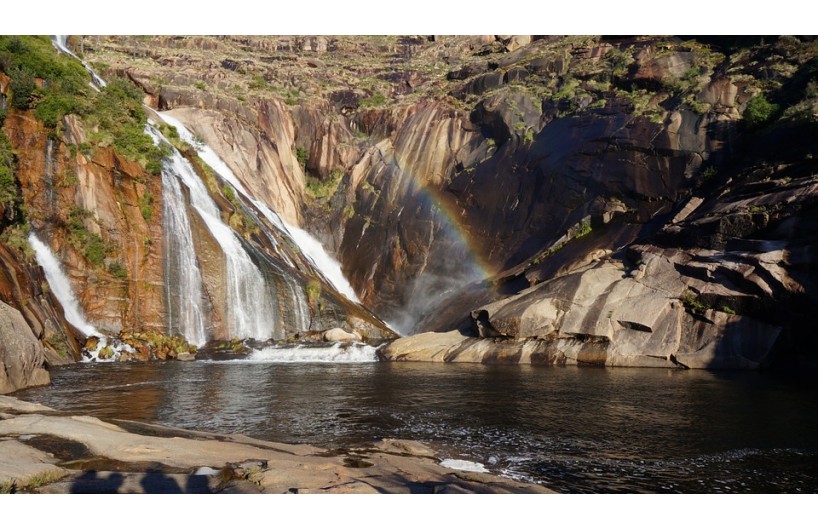 The Costa da Morte occupies the northwest of the Galician coast, extending along dozens of kilometers, within the limits of the province of A Coruña. The personality of this area is marked by its status as the western limit of Europe. Since ancient times, the human being considered this place as the Finisterrae, the end of the world, the door to the Hereafter. After their arrival at this place, the Romans witnessed and told the spectacle of the sun sinking into the Atlantic Ocean.

This area of ​​Galicia is one of the most attractive for visitors and in Simply Galicia we offer you an excursion through the most emblematic towns of the Coste da Morte. A whole day with transportation and guide included in which you will know the land of the gods. The itinerary is the following:

Pontemaceira: place of passage of the pilgrims that go towards Fisterra, Ponte Maceira is a small town with history. Its medieval bridge over the Tambre river and the vegetation that surround it create an evocative atmosphere, full of legends.

Muros: visit on foot of the old area and the port of this fishing village, a reflection of the Galician culture and tradition where the sea is the protagonist.

Carnota: surrounded by mountains and beaches, the natural spaces of Carnota do not leave indifferent. Monte Pindo, its 7km beach are some of the examples. Visit of its famous hórreo, one of the largest in the world, with almost 35m in length.

Ézaro: visit of the spectacular waterfall of the Río Xallas, which crosses Ézaro to end up emptying into the sea in cascade, the only case in Europe. From its viewpoint you can enjoy an impressive panoramic view of the town and its coastline.

Fisterra: the end of the ancient world. Place where the pilgrims who come to Compostela meet the immensity of the ocean. Visit of its Lighthouse, the most important of the Costa da Morte, guide of the boats by their dangerous waters.

Muxía: visit this town to visit one of the most traditional marine sanctuaries in Galicia, "Nosa Señora da Barca" located in a spectacular location on the seafront. Place where the tradition says that the apparition of the Virgin to the Apostle Santiago took place.

If you want to know these wonderful towns, make your reservation!